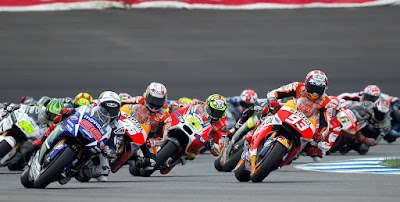 Two main threats were in play ahead of the 2015 Red Bull Indianapolis MotoGP – rain and the rider with a perfect record at Indianapolis Motor Speedway, Marc Marquez. Though the red and white flag signified that rain drops were present with eight laps to go, the race remained dry for the entire 27-lap encounter that took riders nearly 70 miles around the 2.591-mile circuit containing 16 corners.
But the threat of Marquez didn’t subside. The 22-year-old Repsol Honda RC213V pilot remained in second until three laps remained in 2015 Indy MotoGP, round 10 of 18, and then took the lead from Movistar Yamaha’s Jorge Lorenzo. The two-time MotoGP Champion Lorenzo would give it his all to place his YZR-M1 on top of the podium, but Marquez showed no remorse.
This would be Marquez’s fifth-straight win at Indianapolis Motor Speedway, including three-straight in the MotoGP class, and the 50th of his young GP career. The two-time reigning MotoGP Champion retains a perfect record in America, winning every race he had ever competed in, including rounds in Laguna Seca Mazda 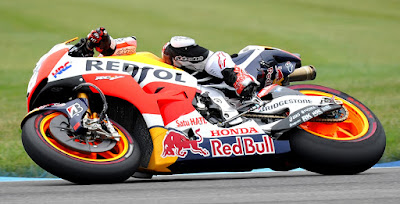 Raceway, Circuit of the Americas in Texas, and Indy. This was Marquez’s first back-to-back finish in 2015 MotoGP after he dominated round nine at Sachsenring, and the sixth-straight time Honda won at Indy.

Joining Marquez on the 2015 Indy MotoGP podium were Lorenzo and the nine-time World Champion Valentino Rossi.
“The race went very well, but we were pretty much on the limit. The truth is that Jorge improved a lot during the race, and I didn’t think there would be so many laps in the 1’32s,” Marquez says. 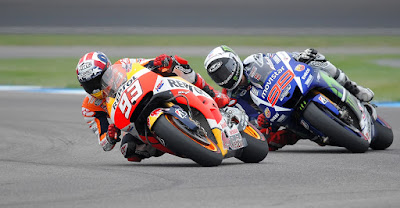 “Even towards the end of the race we did a 1’32.6, which is very fast! We used the strategy of attacking at the end, when there were three laps remaining, and I think it was ideal for taking victory at this circuit. I’m also very proud to have taken Honda’s 700th victory! This is a very special moment for all the team and I dedicate it to all of Honda.”
Due to his third-place finish, Rossi was able to retain his points lead, which he has held since winning the opening round in Qatar. VR46  also kept his streak of season-long podium finishes.
Marquez started from pole – his third-straight at Indy and fifth of 2015 MotoGP – but had to settle in second behind the man who got to turn one first from a second-position start, Lorenzo. In line behind Lorenzo and Marquez at 2015 Indy MotoGP were Repsol Honda’s Dani Pedora, Ducati Team’s Andrea Iannone, Monster Yamaha Tech 3’s Bradley Smith, Rossi, and Monster Yamaha Tech 3’s Pol Espargaro, respectively. As for Ducati Team’s Andrea Dovizioso, he went off the track at turn four and rejoined the grid at the back of the pack.
Rossi wasted no time, and within two laps he passed Smith for fifth, and then Iannone for fourth. Rossi then set his sights on  Pedrosa as Lorenzo and Marquez pulled away from the grid. With 16 to go, Rossi and Marquez were the only riders running in the 1:32s, but Pedrosa would join the 1:32s a lap later. Rossi made his first successful pass on Pedrosa with 10 laps to go, and the two exchanged positions numerous times. 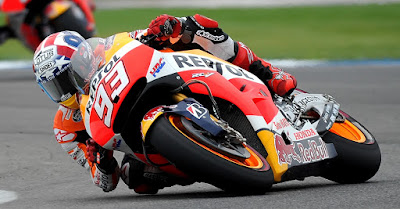 The remaining finishers were far behind these top four. Iannone once again took top Ducati honors, finishing 21.528 seconds behind Marquez. Smith earned sixth, nine seconds ahead of teamamte Pol Espargaro. Rounding out the top 10 were CWM LCR Honda’s Cal Crutchlow, Dovizioso and Octo Pramac Racing Ducati’s Danilo Petrucci.Up front, not much changed as Marquez remained glued to Lorenzo’s tailpipe. Just after setting a new Circuit Record of 1:32.625 with only three laps to the checkered flag, Marquez passed Lorenzo . Though Lorenzo tried, he could not catch Marquez, and finished 0.688 of a second behind his fellow countryman. Rossi took the final podium position 5.966 seconds back, winning the duel with Pedrosa, who finished fourth, 6.147 seconds behind. 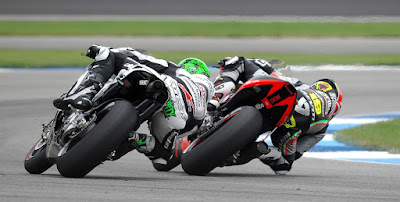 As for the sole American in all of MootoGP, Aspar Honda’s Nicky Hayden finished 16th, over a minute off the pace. Amazingly, the only rider to DNF was CWM LCR Honda’s Jack Miller, who crashed out with 20 laps remaining.
After 10 of 18 rounds, Rossi has 195 points – nine ahead of Lorenzo and 56 ahead of Marquez. Lannone is in fourth, 66 points behind. The 2015 MotoGP Championship now heads directly to Brno for the Czech Republic Grand Prix, August 14-16.
All Credits given to Ron Lieback for writing this article
Photos provided by Denny Scott
View more photos at www.indianapolis-sports-photography.com

Posted by Indianapolis Sports Photography at 8:40 AM