Well it's another year at the track. My first day was Monday 14. I showed up around 10am to get a jump on the day. Practice started at 12 noon sharp. The day started out a little slow but picked up shortly. The new car design was a little hard to get use to at first but being around them all week has changed my mind. I like them. In talking to everyone they say the cars are fast they just need to dial them. Everyone are having problems getting up to speed. Talking to a few of the drivers and crew chefs they think come race day it's going to be an interesting race.

Speeds aren't there yet but come Friday they will get the extra boost which will increase the speeds. I think  quilfing day we may be surprised. Everyday their finding more and more way to tweak the cars to get the most out of them. The cars seem to be stable but in talking to some of the drivers they can be a hand full especially in traffic. 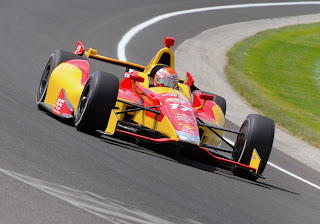 Andretti Autosport young gun Sebastian Saavedra, No. 17 Team AFS Andretti Autosport Chevrolet, set the pace in the second day of practice for the 96th running of the Indianapolis 500. His lap of 40.6272 seconds/221.526 mph topped the chart comprised of 31 drivers taking laps on the famed 2.5-mile nearly rectangle oval. 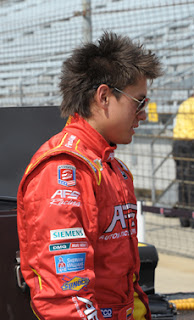 As the week went on the times increased a little but not much until Friday. With the 40# of extra boost we began to see the speeds start to rise. By the end of the day Friday a chosen few saw 225+ .

Friday was a interesting day with plenty of fans to cheer on the drivers. Of note today was the increase in speed as the Chevrolet V-6 IndyCar teams worked on race set-up. Teammates ran together to get a better understanding of exactly how their cars were going to handle in multi-car packs and react to the tow, which is substantially different with the new Dallara DW12 chassis.

Quote "MICHAEL ANDRETTI" On the difference between this car DALLARA DW12 and the old cars. “These cars actually really tow-up. There is a lot of passing now because nobody wants to lead today; they all want to tow. These cars really do tow-up. The last car wasn’t as good. This car seems a bit more lenient on the on the back-end. With last year’s car before you even turned the wheel into (turn) one, you know that the rear is just not there. Something is telling you to back off even earlier where this one you can really drive it in. We can stay flat really close to people. I think it is going to be a good race. The thing that happened with us today I think is going to be good for the fans. There’s going to be a lot of action because what happens is it tows up decently, but once you get somewhat close, it really…that last third of the straightway, it really starts sucking up. So when it does, people are going to have to do those last minute moves. That’s what the race is going to consist of. It’s going to be good for the fans because I think there is going to be some passing. It will be interesting.”

Started out early on Monday showed up around 10am. Practice didn't start until 12 noon. I just went around a few of the garages of some of the teams I know and took a few close up shots. Just before practice started I decided to start out at the 4th turn when I got there I found out that IMS had made all kinds of changes like where we were allowed to stand. IMS had made several changes because of GP race which were the 4th and 1st turn. All the photographers were complaining because we had to shoot threw the fence which isn't the best thing to do. On Wensday when I went back to the 4th turn IMS had cut holes threw the fence for the photographers which we all appreciated.

When I shot in the pits or garage area I pretty much let the camera do the work. I set it on Apeture priority,auto white balance,ISO 400 this seemed to work out great. I use my new 28-300 VR lens in which I fell in love with. What a great lens for a walk around. That's pretty much it if you have question just ask.