On March 17 2012 I had a opportunity to shoot the AMA Monster Energy Supercross held inside the Lucas Oil Stadium. I meet several of the riders and fans all of which were great. I arrived about 10am Saturday morning just to find out they wouldn't let us on the track until 11:30am. 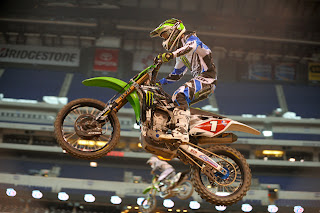 I've been told by several of the racers that Indianapolis had one of the best track layout held by Monster Energy AMA Supercross. Many of the riders commented on how slick the track  was which took it's tool on several of the racers. Several top riders failed to make it out of qualifying. As a result, the championship race took a major dive as Ryan Villopoto’s sole remaining title contender, James Stewart, dropped a full 25 points, essentially handing the season victory to the Monster Kawasaki rider.


James Stewart crashed his JGRMX Yamaha in the start of Heat 1. Kevin Windham was collected in that crash as well. Stewart remained on the ground, eventually riding the medical Mule off the track. Windham would win the LCQ and Brett Metcalfe scored his first Heat win of the year for factory Suzuki. 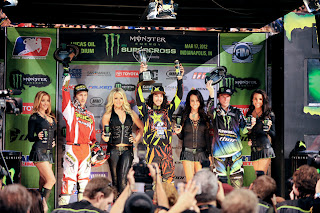 By Lap 5, JGR Yamaha's David Millsaps put the move on the Frenchman just past the mechanics’ area. One lap later Brayton passed into the lead and it took some of the wind out of Alessi’s sails. The privateer Suzuki rider slowed and lost positions to Metcalfe and Villopoto. The reigning champion had his hands full with Suzuki’s lone factory pilot as Metty looked the best he has all season. The Australian rider used a slick rhythm line through an uneven whoop section stretching over 130 feet to keep the advantage. 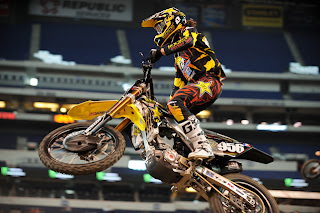 RV kept running his KX450F in tight against the RM-Z450 and eventually pushed his way past for second position. He immediately clipped a tuff block, nearly allowing Metcalfe to retake the spot, but held on and started pulling away. Behind them, Windham pulled an alternate rhythm to the inside of Alessi and their lines collided, forcing K-Dub to bail off mid-air. The veteran rider bounced up with adrenaline, but the reality set in by the time he reached his Geico Honda. Windham pulled off and scored no points.


Just past the halfway point, Brayton started getting caught up in lapped traffic which allowed Villopoto to close the gap to roughly two seconds. RV had picked up on Metcalfe’s line through the whoops and used it a few laps later to take the top spot. Millsaps took advantage of a mistake by Metcalfe for the final podium position.


All my post processing is done in Photoshop CS5 and Bridge. I open all photos in Bridge using raw and adjust my white balance,contrast,and blacks. I then finish in Photoshop.

If you have questions just shoot me a email and I’ll try to answer them.