IKC “Indy Karting Classic” inaugural race. I arrived at Conseco Field House Sunday morning at 7am and meet with Bill McLaughlin in which was the race director. By the way hats off to Bill for putting on a outstanding racing event. 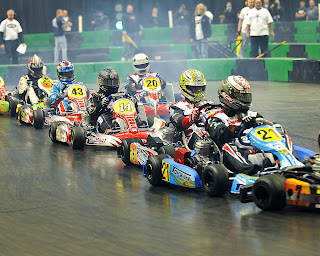 Practice started shortly after 8am. The list of several classes from the rookie class to the Pro Class. The Pro Class consisted of drivers from NASCAR and IndyCar’s series.

IndyCar’s Ryan Hunter-Reay (IndyCar) set fast time of 9.865 seconds with AJ Allemdinger following up in second. Thomas Scheckter rounding up third. Jay Howard  was fourth fastest followed by Ty and Austin Dillion in fifth an sixth. Newley signed IndyCar driver Josef Newgardner was seventh in front of Alex Tagliani, John Andretti, and Tony Stewart. Ed Carpenter had some engine trouble in which kept him from qualifying.The Pro's were driving a few different manufacture karts and engines all called the TAG class. These karts are rocket ships and a hand full to control. All these drivers did a great job of making it look easy. 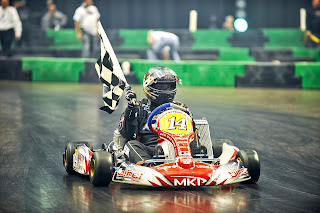 The Pro race consisted of a 30 lap main event. To make a long story short Tony was out to lunch in practice but went back to the drawing board and came out with guns firing to win the first inaugural IKS race.

The fans in the stands consisted of family members to NASCAR and IndyCar fans.  I talked to several fans and they all seem to have a great time. If you like hard aggressive racing don’t miss next years IKC race and I promise you won’t be disappointed. 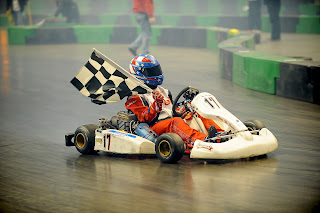 I just wanted to add a little note here on this guy. If you've been around karting at all you could appreciate what this young man did at this race. I first noticed him in practice when he absolutely blew by all his competition. His kart had so much side bite it was  lifting the left rear wheel in the corners. Not only giving credit to he's set up this guy could drive to. He was able to pass on the inside or outside with little effort. I knew he was fast but when they announced his times being only a couple of tenths slower than the PRO's it verified my thoughts. I have no idea what this young mans name was and if anyone out there know please let me know and I'll make a change and give credit where credits dew. CONGRATS!

All my post processing is done in Photoshop CS5. I open all photos in camera raw and adjust my white balance,contrast,and blacks. I then finish in Photoshop.

Again I want to thank Bill for letting me shoot this event.


If you have questions just shoot me a email and I’ll try to answer them.